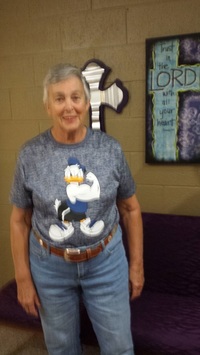 God has prepared Doris since childhood to be an influence in the lives of children.  To prepare them to approach life with Christian values, to understand responsibility and making good memories in the process.

At age 7 her Uncle began to teach Doris to ride a horse, English style.  After coming to Oklahoma she now rides western.  The love of riding and teaching has continued to be part of her life.

Doris attended Camp Juliette Low for Girl Scouts many years.  At age 18, the Director recognized Doris's leadership skills and put her in charge of 12 girls camping 7 days along the Appalachian Trail and later canoe trips on the Tennessee River.  This experience has given her the heart to share camp and horses with as many children as possible.  While working at camp during the summer months Doris earned her teaching degree and taught Junior High School math and science.  Doris was appointed Director of Camp Juliette Low where she continued to influence young lives.  These fifteen years gave great knowledge and wisdom for her future.  She went on to earn her Masters in Education.

Doris met and married Lyman Williams and together they raised two boys.  They spent more than a dozen years learning about music the out of doors in Michigan at Interlochen Center for the Arts.  Today, their oldest son, Doug, is a Chaplin in the US Army.  Rusty, the younger son is a Doctor of Psychiatry, working with troubled youth.

After her family was raised she joined Operation Mobilization in Eastern Europe for eight years.  During that time she worked in finance as well as counseling and Christian education.  While in missions and recently, Doris was able to travel extensively in Europe, the Middle East, Africa, China and India.  Giving her insight into the needs of humanity.

Upon returning from her mission field in Eastern Europe she was able to fulfill her life time dream of owning a horse.  For 3 years Doris attended Parelli Natural Leadership training for horses.  Her desire to introduce children to the valuable lessons in horsemanship; Doris continued her training at Equest Therapeutic Horsemanship Administration workshop as well as Crystal Peak Youth Ranch for abused kids and horses.

Her dream of Finding Hope, Loving God, Kids and Horses became a reality when she opened her first year of Enter His Gates Summer Day Camp in 2008.  It has now been 10 years of campers finding God, learning responsibility while making great memories. Doris is looking forward to the many more young children that will pass through Enter His Gates to find meaningful life.  A horse gives unconditional love naturally thus the horse makes it easy to learn to trust and understand compassion, this makes it easier for a child to understand the unconditional love of Christ and ask Him to be his/her Savior and Lord.